Charlotte Bronte at the Soane

Exhibition March - May 2016 to mark the Bi-Centenary of Charlotte Bronte - curated by Charlotte Cory, writer of Charlotte Bronte in Babylon, BBC Radio 4 drama series about Charlotte Bronte's five trips to London as a published author.  The exhibitions featured an ALL DAY reading of Jane Eyre - starting at the Soane Museum in the morning - where children's author and Bronte Ambassador Jacqueline Wilson kicked off the proceedings -  and finishing at the British Library in the evening (where Jaqueline Wilson also cut the 200th birthday cake), travelling on the "Mobile 5th Plinth" via BBC Radio 4 World at One programme at lunchtime, where Bronte fan and news presenter Martha Karney read at extract 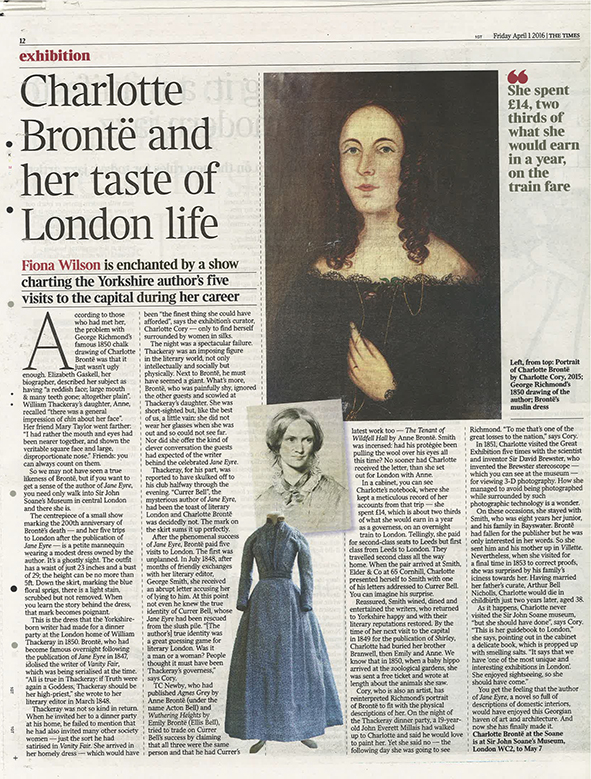 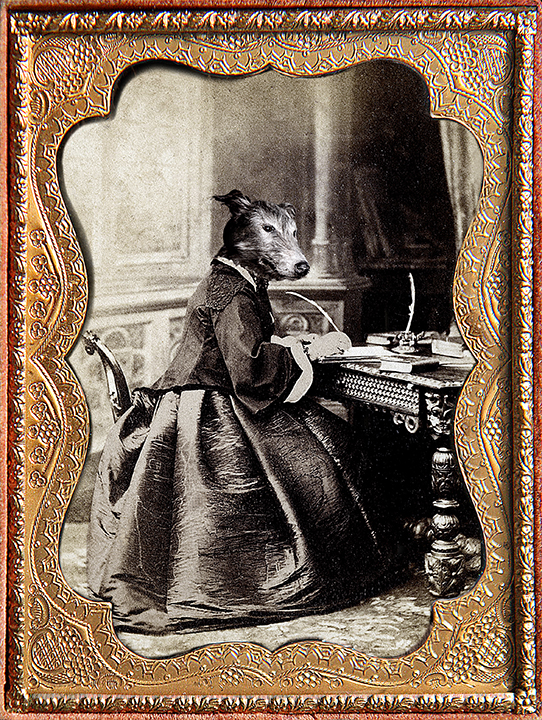 21 April 2016 marks the 200th anniversary of the birth of Charlotte Brontë.   She was born and lived most of her life in obscurity in Yorkshire but, following the meteoric success of Jane Eyre which was published in 1847, she made five trips to London to see her publisher.  ‘New Babylon’ as she called the city had always held a great fascination for Charlotte and her siblings so the opportunity to visit and explore the place was in itself both the achievement of a longheld ambition and a very tangible reward for her literary success.

Charlotte, Emily and Anne Brontë published using the pseudonyms of Currer, Ellis and Acton Bell and this caused a great deal of speculation amongst critics and readers as to the gender and identity of the writers.  The first visit was in the summer of 1848 when Charlotte came with her youngest sister Anne to prove their separate identity.  Emily refused to accompany them but at least by producing another novelist sister, the author of Agnes Grey and The Tenant of Wildfell Hall, Charlotte was able to demonstrate that her sisters’ publishers were lying when they claimed that the hugely successful Currer Bell was in fact responsible for all the Bells’ works.  During this visit Charlotte Brontë established a friendship with her own publisher, George Smith of Smith Elder & Co. and his family so that when she visited again on another four occasions, she stayed with them in their home in Bayswater.  Two of the trips coincided with the publication of her next two (and final) novels Shirley and Villette; the others were fun visits when she was clearly thrilled to be away from the silence of the Haworth Parsonage after the deaths of her brother and sisters.  On these visits, she would arrive for a few days and stay for nearly a month, taxing the hospitality of George Smith’s mother and sisters who became increasingly anxious about the flirtation between the pair, although unlike Charlotte, to George their friendship was strictly business. She enjoyed being lauded as a literary lioness, famously got into spats with William Makepeace Thackeray – the other literary sensation of the day - and engaged in a relentless round of sightseeing.

Sir John Soane’s Museum features in the little pocket guidebook to London that Charlotte owned, so you can imagine with what eager anticipation I once combed the great leatherbound visitor books hoping to find Charlotte Brontë’s signature in the lists of names.  It was a task made easier because I knew the precise dates to check but also harder because she might very well have come with an acquaintance who signed in. I searched in vain.  Alas, no Charlotte Brontë.  Nor any Currer Bell.  I found no George Smith or any other names I could identify as being in the Smith family circle.  Of course there is still a chance that she did visit the Soane Museum, accompanying someone I have not connected with her, but the most telling indication that she did not do so is that she never mentions it in her copious letters home.

One cannot help thinking that if she had known of all the Napoleonic treasures (she was obsessed by Napoleon, having been conceived shortly after the Battle of Waterloo), let alone the collections of pictures, (she was very keen on visiting galleries having once determined to be an artist) she would surely have hotfooted it to Lincoln’s Inn Fields.

What makes this omission all the more sad is that there are few places you can go to in London today that are exactly the same as when Charlotte Brontë was here in the 1840s and 50s.  How better then to celebrate Charlotte Brontë’s bicentenary than to bring her to the Museum at last to make the visit she should have made during those heady trips to London at the height of her literary fame?  How exciting to celebrate the bicentenary in a Museum preserved in exactly the same state as it was when she could have (and certainly should have) walked through the front door…

Charlotte Brontë at the Soane runs until 7 May 2016. Admission is free.